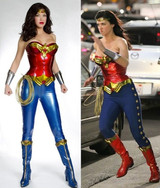 The show would've been something. The video is unedited, so you see the ropes from the jumping and throwing, also, there's 2 spots where director comments flash across the screen. Otherwise, it's the unaired pilot in all its glory.

Although there were times that main actor was quite good of conveying situation. But all in all the effects was horrible. I am not sure if my copy was an unedited copy but strings on people as they were being thrown is something I do not want to see. At the beginning... Pants on Wonderwoman... that was awesome, then at the ending battle, back to the dated outfit... oh well... maybe if they pilot was what brought her to the situation she was in.. .instead of just dropping us off at this point in time.. Maybe the writers thought they would shine a light on the past.... oh well