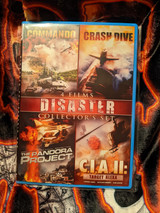 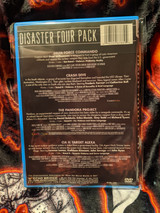 Captain Beck (Fred Williamson) is assigned to hunt a group of Latin American militants and recover the nuclear weapon they stole from the U.S. government.

The USS Ulysses, a 688 Attack Class atomic submarine patrolling in the South Atlantic, encounters five survivors of a shipwreck clinging to a lifeboat. Although their orders prohibit them from taking passengers on board, Commander Derek decides to rescue them. But the shipwreck is a hoax and the survivors are a band of terrorists. On board the Ulysses, the terrorists take control of the submarine and its nuclear missiles. Destination: Washington, D.C. Purpose: Nuclear blackmail and terrorism. A billion dollars in gold bullion or Washington D.C. becomes ground zero in a nuclear attack. As the highest halls of government scramble in terror, one man embarks on a mission to help save his country. James Allen Carter, Navy Data Analyst, expert in submarines, secretly scuba dives onto the Ulysses. Quickly and covertly, he assembles an anti-terrorist team using the combined skills of the submarine crew members. Hiding onboard the Ulysses, Carter begins playing a deadly game of cat and mouse with the terrorists. But the terrorists fight back with added force.

When renegade commando Bill Stenwick (Richard Tyson) steals Pandora--an experimental weapon of mass destruction--from a secret base in the African desert, retired Secret Operations Commander John Lacy (Daniel Baldwin) is called back into the service of his country just days before he's supposed to marry Global News Network anchor Wendy Lane (Erika Eleniak). The honeymoon in Palm Springs may have to wait. Lacy's old boss, Admiral Houtman (Tony Todd) sends him deep into the jungles of Colombia, where the weapon has been traced to the home base of a drug cartel. Stenwick has offered the services of his new toy to the drug lord in return for a handsome fee and willingly demonstrates Pandora's horrifying power on a neighboring village. Pandora's detonation causes the cells of all living creatures to implode, killing the town's entire population with a flash of light, and even the despicable drug dealers are shocked. The deal goes bad, but Stenwick, with his superior training, prevails. He exterminates the cartel members and makes off with their money. The question is…with all the money and power he's acquired, will Lacy be able to stop him!

A top secret nuclear guidance system is stolen from a government facility. CIA Agent Mark Graver (Lorenzo Lamas) and former terrorist Alexa (Kathleen Kinmont), now living a quiet life with her daughter, must re-team. They plan to retrieve the system from Alexa's former lover and father of her child, international terrorist Franz Kluge (John Savage). Competing ex-CIA operative Ralph Straker (John Ryan), now head of a private commando army, intends to sell the stolen system to the highest bidder, which would become a major threat to world stability. With Alexa and the nuclear guidance system in Straker's control, Graver and his bitter rival, Kluge, team together in a game of mutual mistrust to assault the armed base, rescue Alexa and stop Straker.

Be the first to review this product.